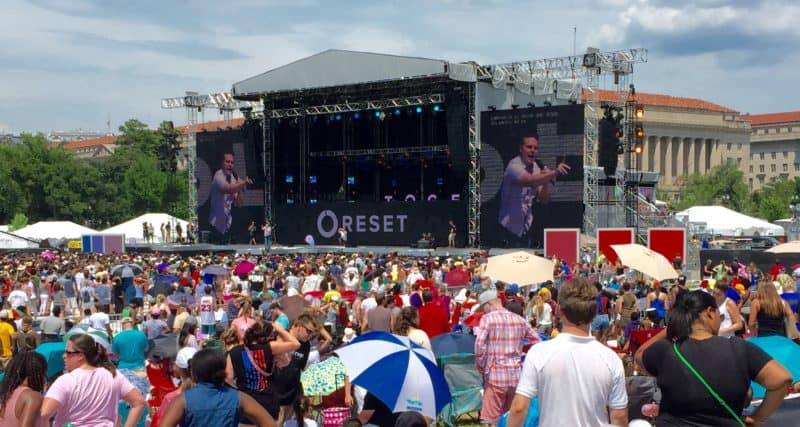 One moment can define a generation. For millennials, that moment possibly took place on July 16, 2016. An estimated 500,000 people of all ages and many denominations came together in the name of Jesus, unified in prayer and worship, with a call for catalytic change. Gathering at the Together 2016 rally at National Mall in Washington, D.C., these Christians traveled from around the United States and several foreign countries, coming to declare that Jesus changes everything and asking him to “reset” the current generation.

Director of Communications, Susan Harris, said they started their planning a year ago, never expecting these past two months to become so violent.

A time for healing and reflection, the event was commonly called “a gathering on the Mall.” Speakers made references to the Orlando terror attack, police killings in Baton Rouge and St. Paul, a sniper attack in Dallas, a terrorist attack that killed 84 people in France, and the attempted coup in Turkey.

Musical guest Michael W. Smith emphasized the need for Christians to invite Jesus into the public square. “For America, we kicked the Healer out; We kicked Him out of the school—we kicked him out of the public square,” he said. “I think it is time to invite Him back in. Whether the government does that or not, we are going to do our part. We are going to cry out to God and say, ‘Would you respond to what is happening today?’”

At that point, the song lyrics, “Everyone needs compassion,” echoed throughout the park as thousands responded by raising their voices to God.

Later on, Casting Crowns opened their performance with the song “Praise You in the Storm.” Hall, the lead singer, felt the event came at just the right time for Americans in crisis and mourning.

“It was really special for us because that is sort of where our country is right now,” he said. “It is in a bit of a storm and a lot of people are hurting. It felt like everyone just came together and prayed it together.”

Nabeel Qureshi, a converted Muslim, reminded the crowd of the importance of the church’s response to the recent tumult.

“We see what’s happening in the world today. We see bombings in Turkey airport. We see shootings in Orlando. We see people killing mindlessly across the world,” he said. “God has a plan to heal this world. And it can only happen through His hands and His feet, and that’s us. Brothers and sisters, you are world changers. Every single one of you has been designed and crafted by God to change the world.”

“Everything now is protests: ‘I’m against this,’ or ‘I hate that.’ We don’t have to agree on everything, but we can come together around the hope of Jesus,” he reminded the crowd. “There are moments when God’s people come together, and God does something that can heal, change, and define generations.”

Although the day’s heat may have halted the 12 hour program after just seven hours, it did not halt a unified call to action. Together 2016 was not just a one-time gathering; those attending the event were encouraged to live in unity as the church, even after everyone separated to go home. In this tumultuous time of shocking violence and division in our nation, the church is called to remain as one—a living testimony of the grace and peace of Christ, whose love is able to transcend all hatred and fear.

Over 950 people attended the Reid Saunders hosted evangelism training meetings, Reach Out Don’t Freak Out!,  as part of the week of events leading up to the main Together 2016 gathering. Fellow evangelists Greg Stier, Mike Svoboda, and Jose Zayas joined Reid in teaching and equipping the participants with various methods of sharing their own personal faith with boldness and confidence.

“I thought the evangelism training was very helpful and informative for all ages. They had a good mixture of light and serious stories, but kept it fun. It gave me tips on how to approach people, and what to say when I get into that conversation. The Dare2Share app is something I will definitely use in the future.” — Megan age 15