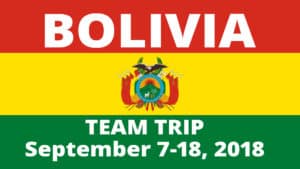 It was exciting to watch God move in so many hearts and lives. Everywhere we went, the Gospel was well received. The fields were truly ready for harvest in Bolivia,” Reid Saunders reported. More than 2,300 people made decisions to follow Christ, September 8-18.

Santa Cruz, Bolivia is one of the fastest growing cities in the world, with more than 2 million Spanish-speaking residents. The bustling city area is filled with migrants and various tribal communities seeking employment opportunities and is located on the upper reaches of the Amazon. The fourteen-member RSA team observed numerous physical and spiritual needs in the area and had the opportunity to share the gospel with more than 7,200 people.

We visited a day care facility and several mud-brick homes within the Ayoreo reservation village, learning firsthand the needs of that community, while giving free medical care to 100’s of children and adults. Some tribe members were open to the Gospel and made decisions to follow Christ, which was a huge breakthrough. Young girls within that community are often forced to beg on the streets for their families and become easy targets for sex trafficing and prostitution when they reach their teenage years. Our team worked closely with American missionary, Rick Methvin of Amparo Foundation, who identifies and rescues vulnerable girls, providing a safe home environment and hope for the future.

Fifteen evangelical churches joined together in unity throughout the Santa Cruz and Yapacani area with a desire to reach their communities with the Good News. 185 church members were trained to share their faith and do follow up after the festivals.

Six public schools opened their doors to gospel presentations that included drama, BMX demonstrations, and personal testimony from team members. Hundreds of middle and high school students responded to the invitation and decided to follow Jesus. Students were given raffle tickets for a bicycle and soccer ball drawings and invited to attend the weekend festivals.

The medical team lovingly ministered to a total of 419 individuals trapped in poverty, dispensing free medical care, filling prescriptions, and identifying urgent medical needs requiring hospitalization. Worms, lice, poor nutrition, and back pain were common medical problems that the team encountered in the poorest areas. Dr. Martin Bassett, visibly shaken by what he had just witnessed in the tribal village remarked, “I have never seen poverty like that anywhere in the world.”

Thanks to our generous sewing teams, 200 free clothing items were distributed to children living in poor neighborhoods. One hundred aprons were also presented to church-attending moms as an encouragement gift and a physical reminder to pray for their children.

Brett Butcher added, “We feel the trip was very successful. Our success, in many ways, was the direct result of local pastors and Rick Methvin investing thousands of hours building relationships with the people and officials. We were able to reap a harvest because they have spent many years cultivating the soil.